This night, pretix.eu had a planned outage for around 70 minutes to allow us to make a fundamental change to our service architecture. In this blogpost, we want to go into detail on what we changed and why. We hope this might be insightful for you if you run a similar service or if you are just curious about the challenges we experience along the way.

The main deployment of pretix, pretix.eu, has a scale that would – with some engineering efforts – probably be able to run from a single high-end dedicated server without major trouble. We’re not Instagram-scale and we’re unlikely to be very soon. Running pretix on a single machine would be much simpler and easier than what we do – but has a very harsh drawback: Servers tend to fail. When running of a single machine, we would be completely out of business with every hard- or software failure of that server.

Therefore, pretix.eu is hosted in a cluster of nodes (currently nine virtual machines) that are designed in a way that in theory every single node can fail at any time without impacting the availability of the system. Since our team is too small to operate a 24/7 on-call schedule, it is important to us that the system can also automatically recover quickly from any such failure, at least in a way that keeps the system running until a human can have a deeper look and clean things up.

pretix itself is a Django application that runs as a webserver in a stateless manner – no important state is ever stored within the application’s memory. Therefore it is quite easy to run the code on multiple nodes in parallel and just have nodes fail at times. The only thing needed to make this seamless for users is a load balancer in front that takes all incoming HTTP requests, terminates the SSL connection and forwards the request to an application worker node that is currently alive. Additionally, the app nodes run Celery-based worker processes that work on longer-running background tasks (like sending e-mail or generating data exports).

We use haproxy as a loadbalancer and to allow our haproxy setup to fail as well, we of course need two of them. Our domain name pretix.eu has two A/AAAA DNS records listing the two load balancer servers. Your browser is usually clever enough to use the working IP address if the other one is not working.

So far, this is a very simple setup, which only gets worse because we unfortunately need to store lots of important data: Events, settings, ticket orders, invoices, etc. Storing data is stateful by definition and therefore notoriously hard to do in a way that satisfies our availability needs.

pretix makes use of two different types of data stores:

To complete the picture, some kind of task queue is required to schedule background tasks and coordinate the Celery processes. It is a hard fact that you can only have a safe, distributed system that allows for failure of a single node while staying fully functional if you have at least three nodes, so we have three database nodes.

For the first years of operation, we used MariaDB (a community fork of MySQL) as our relational database. There were two main reasons for choosing MariaDB:

As a key-value-store, we’ve been using Redis since the beginning and RabbitMQ as a queue server. Both of them have native functionality (Redis Sentinels and Erlang clusters) to create high-availability clusters.

Here’s the old setup in a quickly-drawn picture for your convenience: 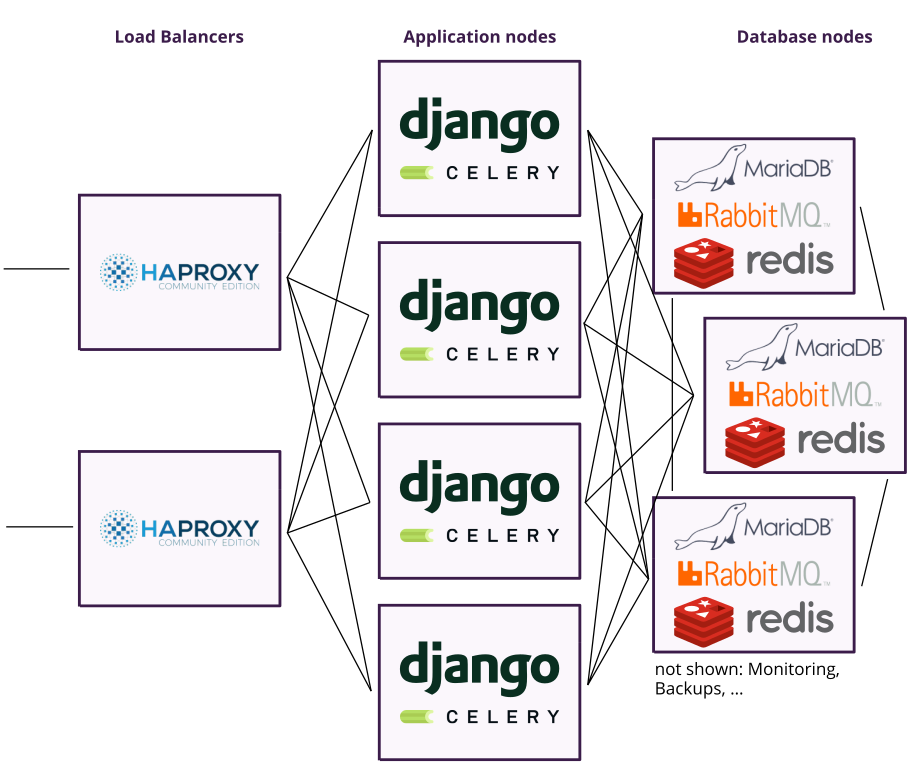 This is still a simplified description. In reality, an additional instance of HAProxy (not shown in the picture) is deployed to every application node with the purpose of redirecting connection attempts to MariaDB, RabbitMQ or Redis only to available database nodes (and in case of Redis, only to the leader since followers do not accept writes). Also, we run multiple Celery worker processes per node in order to distribute load between different queues (to avoid the checkout queue being spammed by email tasks etc) and we ignore the matter of generated and user-uploaded files in this blogpost alltogether, this will be a story for another day.

After more than a year of practical experience with the setup, we learned a lot about its strengths and problems:

Last night, we basically executed three major changes: First, we switched our database from MariaDB to PostgreSQL for the reasons listed above.

Second, we removed RabbitMQ completely. While RabbitMQ only once created a problems in practice, the cluster management is really nasty to get right and it introduces more complexity than we really need. For our purposes, it is completely sufficient to use our Redis instance as a Celery task broker as well. RabbitMQ can do great things that Redis can’t, but we don’t make use of any of them and there is no measurable performance difference in our case.

Third, we set up PostgreSQL together with a new Redis cluster on a new set of nodes with twice as much RAM and CPU power as the old ones.

Here is the new overview: 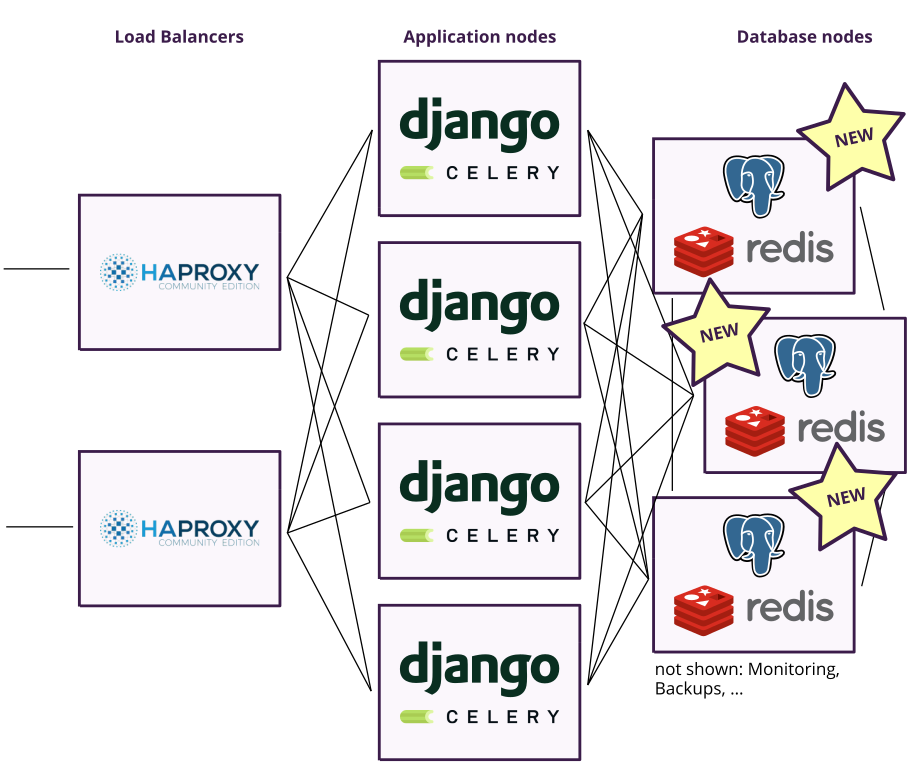 You might now ask yourself how we achieve high-availability with PostgreSQL in a similar way than with MySQL, and even though there are ways to do multi-leader replication with PostgreSQL, the short answer is: We don’t. We have not been able to find a solution that has similar availability properties as Galera and at the same time is simple to maintain.

We decided that we can live with a solution that has a few drawbacks with regards to failover times etc., but is simple, fast and values data consistency. A comparison of multiple solutions lead us to Patroni, a blueprint for high-available PostgreSQL deployments developed at Zalando. In simple words, patroni is a small daemon that supervises and orchestrates PostgreSQL instances by monitoring their status and rewriting their configuration and restarting them when necessary. Under the hood, patroni is written in Python and makes use of a distributed configuration store like etcd that already robustly implements distributed consensus for leader election.

During evaluation, we tested Patroni on a number of AWS Spot Instances and simulated various kinds of outages and found that it satisfies our tradeoff between reliability, simplicity and availability quite well, even though it has some disadvantages.

After all this text on our reasoning and experiences, let’s get our hands dirty and dive into the technical details on how we did it. Before we start, let me stress that this is not a tutorial to be followed. If you ever attempt to do such a thing on your production, be sure to test it properly.

We tested the Patroni installation on a cluster of AWS Spot Instances before we installed it to the production nodes. Before we actually did the migration last night, we had fully performed the migration multiple times on our staging to make sure we’re doing it correctly and we also already performed many of the migration steps with production data to have a proper estimate on the duration it will take.

Migrating a real-world Django database to PostgreSQL is a lot more complicated than it first sounds. There are three simple approaches that come to mind and none of them works as intended:

Migrating a Django database to PostgreSQL: Our working approach

In the end, we ended up with a quite complicated approach consisting of the following steps.

After preparing this over the course of several months, we finally decided for Saturday, 2018-03-10, to be the night to perform the migration. On the Wednesday before, we notified all active customers (= all customers with an active account who have at least one event that is not happening in the past) of the planned outage and started displaying a system-wide banner in the backend.

Saturday morning, we first wrote a checklist to work through over the day that we then followed. Checklists are a really powerful tool to keep calm even in stressful situations on production databases. If you don’t use checklists, make sure to try it out. Also, watch this amazing talk by Daniele Procida. Our checklist roughly looked like this:

Some issues that we had with MariaDB probably remain with PostgreSQL just the same. Despite all efforts with long timeouts and TCP keep-alive packets, the connection between App<>haproxy<>database occasionally dies. django-dbconn-retry looks like the solution but isn’t really considered stable right now.

The problem is a bit worse for Celery/Redis than for Django/PostgreSQL since the celery worker apparently start to hang in this case, so we still need to find a solution for this and monitor it closely. However, since our monitoring system buys a ticket every minute, there should always be some data on the wire and it wouldn’t go unnoticed for too long.

In conclusion, it has probably become clear that running a system that should fulfill certain availability constraints can be challenging even at a small scale. Performing a migration like this required a lot of work in preparation and a full day for executing, but was certainly worth it: The system is already running a lot faster and we’re looking into a bright future with PostgreSQL.

If you’d like to sell tickets for your event with a service which is as lovingly maintained and migrated like this one, make sure to try it out! :)